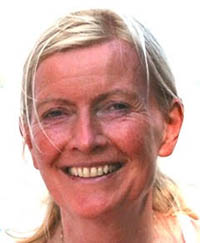 Veslemøy Andersen: I want to promote GHI in every way possible for me to help spreading its goals and contribute to its success. This can be done in Norwegian and also in English everywhere in the world at congresses and meetings, through writing articles in papers and chapters in books to make the goals of our organisation known by as many people as possible all over the world.

This is the reason why I have joined the Editorial Board of the book series “Nutrition and health aspects of traditional and ethnic foods” that will cover all countries of the world. For the same reason I have accepted to be the Lead Editor of the first volume, about the Nordic countries. That will be published in 2018; the other volumes will be published thereafter, 2 to 3 volumes every year. There will be 26 volumes in total.

Further I have joined the Organising Committee for the "1st International GHI Congress on Food Safety and Security”, to be held in Leiden, The Netherlands, 24-28 March 2019.

As a microbiologist, my personal interest is especially food safety, biofilm formation and the risk of worsening the problem of antibiotic resistance of pathogenic bacteria as a result of incorrect use of biocides in the food industry. Recently, I have given presentations about these topics in Kiev (Ukraine), Yerevan (Armenia) and Kaunas (Lithuania).

Ambassadors and Councillors, like all GHI members, do not represent their employers.
Membership is individual and contributions to GHI are based on the scientific conscience of the members.